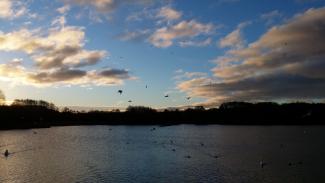 Water management in terms of both quality and availability has many benefits to the AONB including maintaining soil quality, preventing soil erosion and enhancing biodiversity.

The three reservoirs, Chew, Blagdon and Cheddar, supply water to 1.1 million people and businesses in the Bristol Water area and a second Cheddar reservoir is proposed. Both Chew Valley Lake and Blagdon Lake are internationally important for wildlife. Chew and Blagdon are designated as Drinking Water Protected Areas with the catchments that drain to them and these catchments which drain to the lakes have also been identified as Safeguard Zones. The Environment Agency, Bristol Water, Natural England and other partners are developing Drinking Water Protected Area Safeguard Zone action plans to address the sources of nutrients in the lakes.

There is generally a low risk of flooding within the hills as rivers tend to flow underground in a limestone landscape. However flooding has been experienced in the Chew Valley and Cheddar areas where underground streams and rivers emerge. North and Mid Somerset and the Bristol Avon Catchment Flood Management Plans cover the AONB.

A large part of the AONB is within a Groundwater Source Protection Zone due to its contribution to the public water supply. Ground water quality is generally good overall, although there is a need to reduce sources of diffuse agricultural pollution in to the groundwater and water courses and also reduce run-off and soil erosion into watercourses.