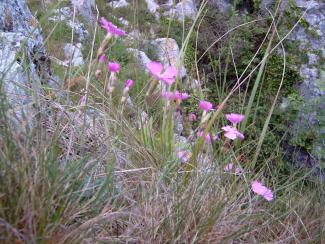 The Mendip Hills have many types of habitats due to the geology, soil types, weather patterns and the human influences of agriculture and mining.

The limestone crags and cliff faces support many plant species including the rare and protected Cheddar pink. Found only in Cheddar Gorge, the Cheddar pink is known as the flower of Somerset. The thin limestone soils support grassland that is home to a variety of insects and invertebrates. Many caves provide valuable roost and hibernation sites for bats.