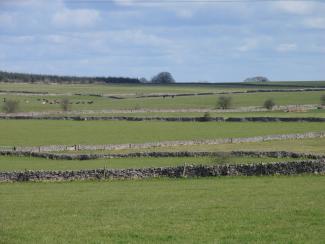 The Mendip Hills Area of Outstanding Beauty (AONB) has qualities that rarely exist in the countryside of lowland England.  The qualities are the result of a combination of factors, including; the type of the rock from which the land is made, geological processes such as folding, glaciation and over millions of years, along with how people living in the landscape; cleared and farmed the land; planting hedges, building walls; mining minerals and with building settlement.

There are 15 Special Qualities;

Views In - how the AONB is perceived from the surrounding countryside

The Mendip Hills are very impressive when seen from the surrounding countryside. The dead flat, low lying land that surrounds them, particularly on the south side, contrasts with the hills accentuating their scale. Added to this, the hills have steep sides and when seen against the sky, an outline that is sculpted and mountain like in character.

The hills are conspicuious and have an impressive appearance from the surrounding landscapes, people enjoy the views and “backdrop” that they provide.

The rockiest and most distinctive landforms, such as Crook Peak and Cheddar Gorge are easily recognisable from the distance and attract attention. The Mendips Hills can be seen from Glastonbury Tor; Brent Knoll; the Polden Hills and Quantock Hills; and even as far away as Exmoor. There are highly distinct shafts of view that look towards the Mendip Hills from key viewpoints at Brent Knoll and Glastonbury Tor.

Views towards the Mendip Hills are also enjoyed from the approach roads from Bath and Bristol and key viewpoints in the north. From this direction the Chew Valley and Blagdon lakes form a foreground to the hills and create attractive scenery that is enjoyed by large numbers of people.

From the summits of the Mendip Hills there are outwards views in many directions. There are wide and far reaching views out over the Somerset Levels to the south, to the Bristol Channel and Wales to the west and to the Chew Valley and the cities of Bristol and Bath to the north. The views are enjoyed from a number of key viewpoints locations, such as; the top of Crook Peak; top of Two Trees lane, near Blagdon; and Dear Leap. In many places the views are 360 degree wide views. In addition to the wide views, there are also “view shafts” to key landmarks such as; Brent Knoll, Glastonbury Tor, Pen Hill Mast and Cheddar Gorge.

The Mendip Hills AONB is a rocky or “Karst” landscape. The rock is very close the surface and the soil is thin. The landscape has a “thin” or “gaunt” character. The Mendip Hills plateau and scarp slopes are sparsely populated, with settlements largely confined to the spring lines at the base of the hills.

A rich farmed landscape with fields divided by hedges.

A simple and unified landscape

The widespread use of stone as a building material along with the dominance of extensive pastoral farming unifies the Mendip Hills AONB landscape. Stone is used for buildings and field boundaries. Buildings are usually of low status and simple.

The steep slopes that form the sides of the Mendip Hills are free from development and as a consequence give the landscape a wild and tranquil character.

The landscape is open, boundaries are usually low (walls) the horizon is low, the sky is visible and the atmosphere and weather are very much part of the landscape experience.

Caves, for their wildlife, geological, archaeological importance including Avelines Hole the oldest cemetery in Britain and Goughs Cave one of the most important Palaeolithic sites in Europe that provides a breeding site for Lesser and Greater Horseshoe bats.

A landscape that is pot marked with dips and hollows.

Large areas of inaccessible land, the lack of a major population centre, absence of development on the most visible slopes and only a few roads that cross the area, means that the Mendip Hills AONB is a relatively tranquil landscape.

The landscape is the result of farming and mining activities over thousands of years and remains present in the culture of the area with elements such as; the Axbridge Strawberry Fair, Priddy Sheep Fair and Priddy Folk Festival.

Visible evidence of ancient habitation of the land

Evidence of human settlement dating back 500,000 yrs. Henge monuments, barrows and hillforts through to World War 2 sites are prominent features on the plateau as are remnants of Roman and Victorian lead mining.

The thin limestone soils and the soils in former mining areas support a unique range of rare plant species and habitats.

A feeling of the (recent) past

Lack of recent building or highway improvement means that buildings, cast iron road signs and post boxes for example, are evident and play a strong role in defining the character of the landscape.